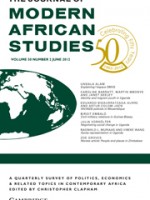 HIV/AIDS policies in Mozambique and the new aid architecture: successes, shortcomings and the way forward

HIV/AIDS policies have become a significant and controversial issue in Mozambique in recent years. The extent of the disease, along with a massive involvement of the donor community and a committed response by Mozambican authorities, are the main drivers of these policies. In the framework of the new aid architecture, donors are expected to encourage recipient country ‘ownership’ of development policies through new aid instruments like budget support or sector-wide approaches. However, HIV/AIDS policies in Mozambique are highly influenced by donors, because an exceptionally high proportion of the financial resources and policy formation comes from them. In this article we assess the extent of HIV/AIDS and its effects in Mozambique, and analyse the successes and shortcomings of the policies to fight the disease, emphasising the role of donors. We end by exploring possible ways to increase ownership and effectiveness.