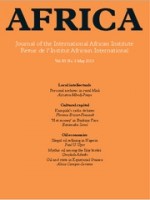 Publisher: Africa: The Journal of the International African Institute,   2013.