GEA-UAM, through its researchers and according to its specialization domains, has realized several consultancies, researches, reports, and knowledge transfer projects, both for public and private institutions. We have realized, among others, the followings projects:

Technical Assistance for the Elaboration of a Study on Children on the Move in the Sahel (Save the Children, 2016)

Children on the move constitute one of the priority areas for Save the Children, as stated in their Strategic Plan for 2016-2018. In tune with this priority, the objective of this consultancy is to strengthen the organization’s interventions in the Sahel region, from a human rights and development perspective, by means of a regional analysis about the reality of the children on the move, the political and normative frameworks, and the existing regional strategies related to that issue. 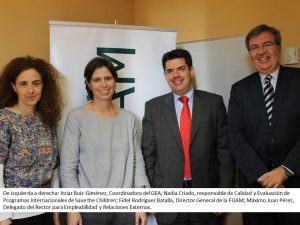 In the framework of the bilateral project, between the Spanish Agency for International Development and Cooperation (AECID) and the Secretary of State for Human Rights of Angola, for the “Institutional Reinforcement of the Secretary of State for Human Rights and its Strategic Partners”, the African Studies Group (GEA) has been in charge of the elaboration of the Human Rights National Education Strategy (ENEDH). This Strategy constitutes the programmatic document of the Government of Angola for a human rights education of all its citizens through key sectors: formal education (since primary school up to the university), informal education (literacy and civil society), health sector, juridical sector, and security forces. 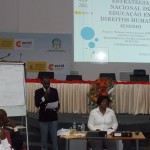 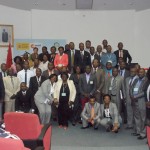 In the framework of the bilateral project, between the Spanish Agency for International Development and Cooperation (AECID) and the Secretary of State for Human Rights of Angola, for the “Institutional Reinforcement of the Secretary of State for Human Rights and its Strategic Partners”, the African Studies Group (GEA) has been in charge of the elaboration of the Human Rights Formation Plan. The Formation, of over 130 hours, took place between March and October 2014 in Luanda. It was followed by civil servants form several Ministries, and members of the civil society, and was taught by specialists of the Grupo de Estudios Africanos and from other universities and institutions.

This technical assistance consisted on a research on the position adopted by the main ECOWAS member states in relation to the regional integration processes promoted by the institution, especially in those sectors that are being supported by the Spanish Agency for International Development and Cooperation (AECID) (agriculture, food sovereignty, renewable energies and energetic connectivity, infrastructures), and an assessment of the impact and effects of the EU policies towards the region.

The aim of this research was to analyze the evolution and characteristics of the Spanish cooperation in sub-Saharan Africa. The investigation consisted in the identification of the main Spanish actors, public and private, intervening in the continent, as well as the main sectors of intervention and the main aid recipient countries. The study focused on the increasing tendency of the Spanish cooperation since 2005, and especially the rupture since 2009.

Reflections on the Spanish Cooperation in Africa (FCEAR, 2010-2011)

In collaboration with the “Africa Counts” campaign of the Fundación CEAR, in consortium with Fundación IPADE and Solidaridad Internacional, the GEA participated in the realization of different investigations on the Spanish cooperation in Africa, published in the book “África cuenta: Reflexiones sobre la cooperación española”. Eight researchers contributed to the final publication, covering different topics such as health cooperation, Spanish official development aid towards Ethiopia, food sovereignty, etc.

The book is available for download in our publications section.

Project on the Coherence of Spanish Policies towards Africa (AECID, 2009-2011)

This project (09-CAP-2-1484) was selected by the Spanish Agency for International Development and Cooperation (AECID), in the framework of its 2009 Open Call, for analyzing the Coherence of Spanish Policies towards Africa. The project was articulated around four main themes: health, migrations, energy security, and peacebuilding, fundamental for the promotion of development and good government in Africa, with the aim of contributing to the harmonization of the different Spanish policies in Africa.
As a result, we published four reports, available for download in our publications section.

Adaptation to the African context of the distance training manual on sustainable development and decent work, realized by the Sustainlabour Foundation and the International Formation Center of the International Labour Organization for Latin America.

The Spanish NGO Coordination association (CONGDE) included in its 2009 report a special issue on the evolution of the Spanish NGOs’ work in Africa. The GEA realized this report, gathering and analyzing quantitative and qualitative data according to the sectorial and geographical official priorities, amounts executed, human resources employed, types of intervention, and impact.

The special issue on Spanish NGOs in Africa is available for download in our publications section.

Error: (#10) This endpoint requires the 'pages_read_engagement' permission or the 'Page Public Content Access' feature. Refer to https://developers.facebook.com/docs/apps/review/login-permissions#manage-pages and https://developers.facebook.com/docs/apps/review/feature#reference-PAGES_ACCESS for details.
Type: OAuthException
Code: 10
Please refer to our Error Message Reference.
We use cookies in our site. So if you continue to navigate through it, we will consider you accept and do agree with them.I agreeRead more